The mission: find adventure books for my boys that they won’t finish on the car ride home from the library.

The players: Eight and eleven-year-old boys that fill their library bags with Diary of a Wimpy Kid, Big Nate, and other comic-style books. Frustrated Mom who doesn’t have time for weekly library visits.

When all hope seemed lost and I thought we’d never escape the Diary of a Wimpy kid and Big Nate, this Mom called on her book ninja skills and turned those weekly trips into every three weeks.

While the boys are hiding out in the graphic novels, ninja Mom scours the shelves for adventure books I think they will love.

One home, I fill our reading basket with my “suggested” adventure books and the next thing you know I’m hearing, “Hey Mom, this is a really good book. Can we get the next one?” Muah-ha-ha. Little did they know their Mom was such a super book finding ninja.

Of course they aren’t always hits, but I’ve compiled a list of adventure books that were a definite hit with my 8 and 11 year old boys. Now you too can earn your book ninja black belt. Enjoy!

1.Treasure Hunters by James Patterson. This is a series of books that my boys loved, and they even learned about new places around the world. The stories follow siblings that travel the world with their famous treasure-hunting parents. My oldest actually said these are his 2nd favorite books after Harry Potter (that’s huge)!

2. The 13-Story Treehouse: Monkey Mayhem! by Andy Griffiths. This is another really fun series of adventure books about two boys, Andy and Terry, that live in an amazing treehouse full of fun things like a pool, bowling alley, and a marshmallow machine that automatically shoots marshmallows in your mouth when you are hungry! There are 8 books so far, and each title is a multiple of 13 (math skills too? woo-hoo!)

3. Max and the Midnights by Lincoln Peirce. From the same author of the Big Nate books, this book is about a young troubadour named Max who longs to be a knight. His uncle is kidnapped, so he sets out on a quest to with a band of brave adventurers called the Midknights to save his uncle. This book is a mix of comic-book style and text, but at 279 pages, it will keep your boys entertained for a while!

4.The Explorers: The Door in the Alley by Adrienne Kress. The first in a series of two books (so far), this book is full of adventure, danger, and lots of laughs. For kids who are “feeling a little bold, or maybe even a little italic.”

5. Addison Cooke and the Treasure of the Incas by Jonathan W. Stokes. Billed as “The Goonies meets Indiana Jones,” this is the first in the Addison Cooke series of adventure books. Addison is a 12-year-old boy who longs for excitement, and adventure finds him when his treasure-hunting aunt and uncle stumble upon an amazing find. If your boys liked the Treasure Hunters series, this should be the next book they read!

6. The Boys Book of Adventure: The Little Guidebook for Smart and Resourceful Boys. I personally can’t wait to dive into this book with my boys this summer. It’s full of more than 40 ideas for outdoor activities and craft projects that teach you things like reading maps, identifying insects and birds, and camping skills! A perfect book for Boy Scouts or any boy that loves outdoor adventure.

7. The Hardy Boys by Franklin Dixon. Yes, the Hardy Boys still make the cut on our list of adventure books for boys. My son started with a book in the middle of the series but decided he needed to start at book one and read through the series in order. And yes, there is also a more “modern” series of the Hardy Boys, but I love to hear the questions that come up while my boys read these books and their references to “old fashioned” items. And did you know that Franklin Dixon is a pen name used by several authors that have written for the series?

8. Percy Jackson and the Olympians series by Rick Riordan. We read the Lightning Thief as part of our homeschool curriculum this year while studying Greek gods. My boys were hooked, and quickly devoured the whole series of books. My 11-year-old also asked for the next series, Percy Jackson and the Heroes of Olympus, for Christmas. To say they were a hit is an understatement! Bonus — my boys can tell you all about the Greek and Roman gods and now see and understand the numerous references to Greek culture in our current society.

9. The Super Life of Ben Braver by Marcus Emerson. The first in the Ben Braver series, this book introduces Ben, an ordinary kid who dreams of being a super hero. While out on a quest for a peanut butter cup he comes to the aide of someone in need and ends up being selected to attend a secret school for kids with super powers! Now he just needs to make sure they don’t find out he doesn’t have any!

10. Lucy and Andy Neanderthal by Jeffrey Brown. While this series is aimed at a slightly younger crowd (2-5th grade), my boys still enjoyed the adventures and the factual information that is included in this book. Lucy and Andy are a Neanderthal brother and sister who live a typical prehistoric life, which is quite full of adventure compared to our modern day lives! In each chapter, real archaeologists dig through their cave home and provide factual comments about Lucy and Andy’s life. Adventure and learning history? Win-win!

Bonus: The list above includes books that my boys have read and given big thumbs up to. But here’s a bonus list of adventure books that are on our summer reading list:

I hope that this list has helped you find some new adventure books to add to your son’s library! Are there any I missed that you think we should check out? Let me know in the comments! 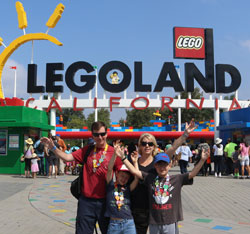